What a surprise!! I won $100 for this story about my childhood in Kenya "Boarding School at Mara Hills"

I never could eat that first week at school.  My parents had no choice.  The mission board under which they went to Kenya gave them no choice.  They had to send us to boarding school.  I was nine, and my sister Lydia was seven.
My sister, Lydia 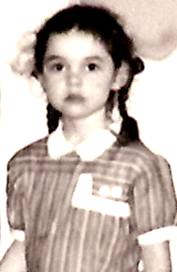 My parents drove us in the old green pickup with the canvas-covered back that first time.  We rode behind the cab leaning against our luggage, the red dust thickening our hair as it seeped through the cracks.  Two others missionary kids rode with us.  After hours fighting rutted dirt roads, we were stymied by an impassable river rushing toward eager banks.  New to Africa, my Mom had on high heels but gamely took them off, wading through mud and streams those last few miles to Mara Hills.  My sister and I could hardly contain our admiration.  Mom was seven months pregnant. 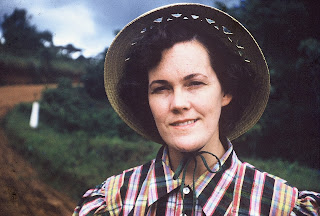 We walked five miles with our luggage watching the sun burn itself out.  The black impenetrable night was punctured by a vast array of stars as we arrived. We sat patiently waiting on a bench next to the flickering candlelight in the entrance of the u-shaped building while our beds were hastily prepared.  Lydia rested her weary head on my shoulder, her silent tears burning into my neck.  My dad was feverish and shaking with chills from his first case of malaria, one of many to come.  He still managed to get up at the first light of day and trudge back with two Masai men to push the truck out of the rising river.


How could I imagine what lay ahead?  There were bars on the windows, beds from twisted Zebra hides, flashlights boring a bouncy minuscule shaft in the night on our way to the outhouse, an eye out for snakes.  I routinely shone my flashlight down the hole in the rough wooden seat, prompting nightmares of slipping into the maggots swarming below.  “I suspect a slight infraction,” the housemother announced one morning, a smile playing around her thin lips.   We were supposed to use the potty under our bunks at night.


The hunt brought gazelle and impala for our meat, salted down to preserve it.  No fridge at Mara Hills.   We had little garden plots where we all competed, urging on our corn and tomatoes.  We fought to take out slop to the pigs, which were also butchered for meat.


We went barefoot to class, a one-room schoolhouse, grades 1-8.  I saw my first dead body, a man lying stiffly in the back of the school pickup right before class.  We popped green coffee beans right off the plant into our mouths, saving them in our cheeks, enjoying the sweet juice as our heads bent innocently over our books.


The Mennonite house parents were stern but kind.  I missed the daily hugs and kisses from Mama and Daddy that I had so taken for granted.  I wrote letter after letter begging them to come get us.  The letters were not sent, I learned later.


Meals were formal, our cloth napkins stuffed carefully in rings made from sliced Impala horns.  Dessert was often one cookie with a raisin in the center, as lonely as I felt.  A freckled girl with long strawberry braids tried to dislodge a guava seed caught in her teeth with her fork.  She got cleanup duty that meal.  Manners were important at Mara Hills.  Her Dad owned a diamond mine in South Africa.  She did not get one letter from home.


My sister and I clung to each other for security.  One day to my horror, she ran towards me, dark braids flying, one eye pinched shut with a shiny eyeball gracing her palm.  Panic gripped me as I realized I had failed to watch out for her and she had lost an eye somehow.  Convulsing with laughter, she opened her eye shouting, “pig eye.”  It was slaughtering day.


Semesters lasted three long months and then home for a month and so on.  Headed for home at last, Lydia and I leaned against the rail of the steamer as it inched from the shore of Lake Victoria in Musoma, Tanganyika headed for Kisumu, Kenya.  It was just too far and dangerous for Mom and Dad to fetch us by truck each time.   We turned towards our stateroom where two small beds would see us through the lonely night.


Noon the next day, the sun like a scream in the sky beat down on the black skin of Africans swaying and humming softly to the throbbing of the engine.  Their night had been spent on the deck under the stars.


At sundown, we nosed into the harbor.  Two thin figures became clearer as we neared the shore.  Dad in khaki shorts and Mom, long legged and slim, smiling, holding the baby brother we had not seen yet.


Three months’ emotion let go and I sobbed with total relief at what seemed happiness beyond my wildest dreams.  I would be home in Kaimosi in two hours.
Probably Mombasa in front of Ft. Jesus.
This picture got wet during the Hurricane Ivan in Pensacola. 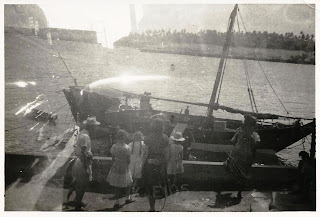