"We love your house,” they gush.  “When we saw your listing on Craigslist, we heard God say; "THIS IS THE HOUSE FOR YOU.”  He is a little tousled with sloping shoulders and a paunch hanging respectfully over his belt.  A thatch of graying hair spills over his earnest face.  She is blond, matronly, with hair sprayed like cement.


“Can we move in tonight?” he ventures brimming with eagerness, bouncing his caterpillar eyebrows.  He pulls out first and last month’s rent plus deposit in crisp greenbacks.  Their credentials check out.  She is a nurse looking for a similar job in this area, he is retired from what, I wasn’t exactly sure but it sounds good.  Their credit record is clean.  With the sensitivity of a fence post I mutter to Jim, “probably too good to be true.”  “Keep an open mind,” Jim shoots back, his usual optimistic self.  I’m thinking, if my mind were any more open, my brains would fall out.


Not long back from a building project in Brazil, which had substantially diminished our dwindling resources, we have a building trip to Haiti looming so the news of the dream tenants was like finding a Stradivarius at a yard sale.
This was the first house Jim built when Esson Construction Company was birthed in 1987.  We were sitting on the brick steps of our home in the heart of Gulf Breeze, Florida when the call came that our building loan at 14% interest had been approved.  The house was a speculative venture, which I do not recommend. Jim put heart and soul into that first endeavor.


The property rested among patchy ranch styles on a ribbon of black asphalt.  Holley by the Sea was a golfing community in the infant stages, promising every amenity for your future success, fulfillment and pleasure. This lot, of course was nowhere near the golf course. Jim erected a 1400 square foot bungalow style house on that half-acre strip of sand pickled with red mud and cactus scrub, about all that would grow on that $5000 lot.  Blue with white trim and white shutters, all that was missing was the white picket fence.

That was almost 30 years ago. After that first house and with blood, sweat and tears, Jim built his construction company towards its eventual success.

We never did sell that house.  When one of the contracts fell through at the last minute in 1994 our first year in missions, we decided maybe God wanted us to keep it.  Our first renter was a single guy.  He stayed for 12 years, never complained that the carpet was wearing out and was never late on the rent.  He helped pay for that house until he bought his own.

After that, it was renters with dogs that had apparently lost all bladder control, doors pulled off the hinges, fist holes in the wall, backed up toilets, blinds that looked like accordions run over by a semi truck and mustard colored paint in the kitchen that would make a blind man sob.

The pest control company we paid $200.00 each year to treat for termites never informed us that termites were making a smorgasbord of that blue house probably because he never stepped foot near it or because he figured we were far away in the Congo or Sudan held captive by restless savages.

It took over a year to repair, done sporadically whenever we were in the USA or late at night to repair the damage from the monster termites.

That’s why we were elated at the too good to be true renters.  The eager couple furnished the house from garage sales and flea markets, or so they said.  Everything matched perfectly.  It looked fabulous.  They insisted we look.

Several weeks later with the Haiti trip under our belts, we return from a trip to Cuba.  A church needs rebuilding.  The church leaders want us to take the project and life seems pretty good.  The charter plane taxies into Miami airport and the stairs roll into place.  The wind hits us hot and heavy, like a blast from an oven, pleasantly scented with jet fuel.  My skirt flaps around my knees and I grab my hair as we maneuver down the gangplank.   Brimming with hope, inspiration and dogged determination, we don’t even mind the long lines in customs.

I’m relieved to talk freely in the good ole USA after a successful week keeping my mouth clamped shut about communism.  Our church actually gave Jim a roll of duct tape right before we left for Cuba to tape my mouth shut.  I naively thought it was for construction until Jim clued me in.  They gave me Tylenol PM.

After weathering customs, we sit to wait for our next flight.  There was no phone or Internet service in Cuba so Jim powers up expectantly.  Phone messages stream into his cell phone like a ticker tape parade and e-mails by the truckload.  Jim listens to messages and sits studying his shoes with a grim face.  He turns to me, obviously perplexed.  My words come in a rush.  “They did what?”  He supplies the salient parts of the story.  I don’t even feel like saying, I told you so.

Our dream tenants, claiming to be the owners, were renting our home to multitudinous individuals, collecting deposits in cash.  The Bonnie and Clyde of rental fraud used our same ad from Craigslist, pictures and all, substituting their phone number, which of course was now conveniently disconnected.    Infinitely resourceful, they told one renter that there was an electrical fire that would delay the availability of the house by two weeks, giving them time for additional victims and more deposits. 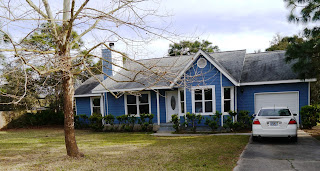 At their large estate sale, I just know they sold that brand new industrial sized front loading washer and dryer they rented from a local rental company.  I could remember thinking, “how could one couple have that much laundry.”


One bilked tenant thought to check county record for the real owners, saw our name and found us on facebook.  There were panicked messages there as well.


The last we heard, the couple was somewhere in South Florida, no doubt pulling the same scheme.  Unless…..there were other schemes.  We wondered if it wouldn’t have just been easier to get real jobs.


I guess you could say our fraudsters successfully avoided the awkwardness of sad goodbyes to their two gullible landlords.  Ever thoughtful, our crooks kindly left us two storks, fastened securely on each side of the front door and, a porcelain fish sitting jauntily on the steps with a long curling plant  growing from its gaping mouth!