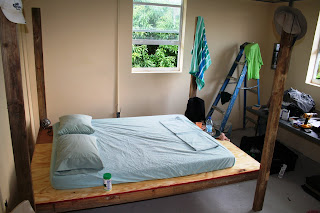 Our bed "custom built by Jim" for the Luxury Suite
made my trip alone to Haiti worth it all.
It gave me an idea how to make millions so that we
won't have to raise support, just travel the world doing missions. :)
American Airlines led me to believe that they held the airplane for me in Miami for 30 minutes. I don't actually think that's possible.
I bet they were having mechanical difficulties.

When an attendant ran me down the corridor to the door, the agent was controlling some real fury, and what he said didn't even resemble
"Welcome to the flight."

The flight attendant kindly told me to sit in the first empty seat
and get my seat belt on. Empty seats stared back at me in first class,
but being the spiritual giant that I am I walked to the back to 24 D.
Also, I didn't want to push my luck.

I did not get a heroes welcome, just stony looks
from the other passengers.
Settled and bolted in I noticed the top of my foot was swollen...... I mean swooooollen and an unusual color. I don't know what I did to it.
It doesn't hurt one bit, just looks despicable.

When I got to Haiti the pilot & crew kindly but laughingly said, "Glad you could make the flight" as I passed through the door into the wet Haitian heat.
The airport in Port Au Prince was a zoo.
Chivalry is dead....at least in Haiti.
A sweet Haitian girl helped me
pull the 50 lb suitcase off the carousel
after the 7th or 8th pass.

It got caught in the carousel and it pulled the metal binding
off the bottom. We yanked and yanked as it carried us with the moving belt and I thought the entire contents were going to end up on the floor.

While I waited for my other luggage, two worried Haitians approached me timidly and it turned out it was their suitcase.
Mine which eventually came around were unharmed.
I stood up on the back of the cart so that
I could see the carousel through the crowd of men.

A thin wiry, wrinkled Mennonite lady with faded lips about 4 ft tall
guarded my other suitcase or I probably wouldn't have it.
I was sweating like a pig, if I may be so indelicate.
When I finally got out of the bldg. porters swarm me.
One grabs my cart and wants to push it for me.
It's dangerous to go outside the locked fence area
which they have changed since last time.

I told him I was waiting for Miguel in a green shirt and
I could push my own cart.
He pushed it anyway hastily through the concrete area inside the gate.
He insisted he knew Miguel and that he was
waiting outside the gate in a truck.
I didn't believe him.

I was worried and continued to protest loudly. 100 yds later I could see the beautiful outline of Jim standing just outside the gate
as I strained my eyes through the glare.
I didn't expect him and that man is just the best looking thing I've ever seen. 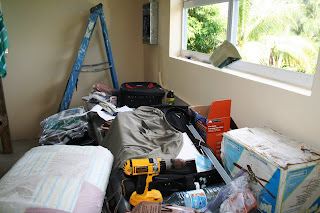 This is the table we use for a dresser. We have two windows in our room. The glass is busted out of one pane which helps with additional breeze.

See the mirror in the window! 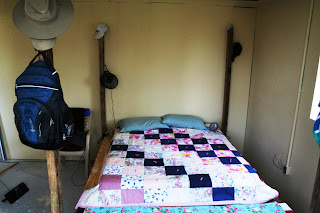 This is the bed after I add my touch.
Note the hanging fan, and the radio on the floor. Only the best!!!

I should keep a journal but I'm just too lazy. Maybe it's the heat. No, I have a lazy mind...I admit it. The donkeys and roosters wake us at 4 AM

We are excited that group of 15 volounteers from San Diego arrive this afternoon!!!!!!!

Posted by Jim and Karen Esson at 9:47 AM 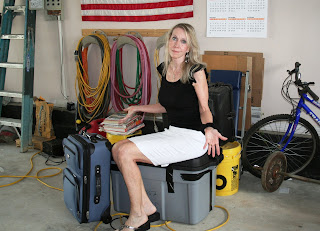 We packed this brand new air conditioner exactly as American Airlines told us to on the phone. I'm back home sitting on it a little dejected. I was dreaming of some cool air if the electricity came on in Haiti.
I'm afraid I did not display a Christian attitude at the airport earlier in the week when Jim left for Haiti. My conscience is bothering me so now I have to go apologize to the policeman.
I join Jim on Thursday. No I didn't get arrested.
Posted by Jim and Karen Esson at 2:32 PM 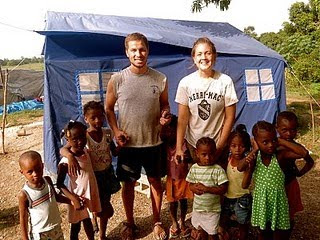 In two days our superintendents, Brian and Lorey Wetmiller will leave Haiti. Even though they are young and energetic, it's hard to believe they have put the roofs on 44 temporary shelters and prayed with 42 families. They have completed the footer for the first building on the orphanage property, and worked hard on the upstairs of the guest house,
"The Haitian Queen."
They also cared for volunteers and the guest house when needed. They are true servants. I don't know what we would have done without them. 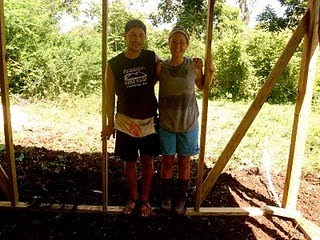 Many days the heat index was 115 degrees, but they plugged along in spite of it. 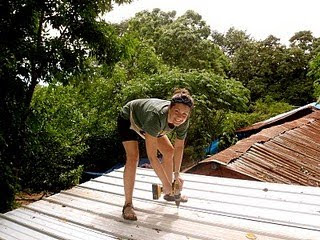 Brian and Lorey have made a huge difference to us as well as to all those whose lives they have impacted both spiritually and physically.
We look forward to having them at our home-office July 18th and 19th for meetings, debriefing, planning, and hopefully some fun in between.
This was their first assignment with "Side by Side" and we would like to thank them for a job well done. We know God sent them our way and it was a huge answer to prayer for us. We hope it will be the first of many assignments to come.
OUR RETURN TO HAITI
Jim returns to Haiti July 23rd and I will join him July 29th. We booked one way tickets since we don't yet know when we will come home. We expect three crews of volunteers back to back.
Jim will initially go to Cap Haitien in the north to transport the remaining contents of the last container 8 hours over the mountains on those winding potholed roads to Gressier. (see June prayer letter on http://www.essonnews.com/. We need the materials and tools to continue work on the upstairs of the "Haitien Queen" and Shepherd's House Orphanage.
Please continue to pray for us and the people of Haiti.
Posted by Jim and Karen Esson at 4:06 PM

This Little Girl Stole My Heart

AND NOW A WORD
FROM OUR SPONSOR:
"Feed the hungry, and help those in trouble.
Then your light will
shine out from the darkness,
and the darkness around you
will be as bright as noon.
The Lord will guide you continually,
giving you water when you are dry
and restoring your strength.
You will be like a well-watered garden,
like an ever-flowing spring.
Some of you will rebuild
the deserted ruins of your cities.
Then you will be known as a
rebuilder of walls
and a restorer of homes."
Isaiah 56:10-12
Posted by Jim and Karen Esson at 8:46 PM